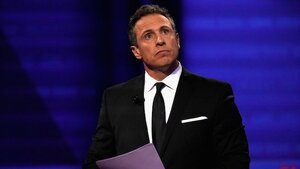 “It appears that his days are numbered at this particular network… he’s lost 80% of his audience since the beginning of the year.”@JoeConchaTV on what’s next for Chris Cuomo after he is suspended by CNN for his involvement in his brother’s response to sexual harassment claims pic.twitter.com/S21QEWZAFN

You broke our hearts.

He Ain’t Handsy, He’s My Brother