The Government has delayed the introduction of PCR and antigen testing for air and sea passengers arriving into Ireland by 48 hours.

The measure was due to come into force today, however an Aer Lingus spokesperson told RTÉ News that they were informed last night by the Government that the regulations will be delayed until Sunday.

The Government delayed the testing requirement in order to allow passengers and carriers to prepare for the measure.

A senior Government source said this would give more time, for example, for passengers to get a PCR test and result before travelling into Ireland. 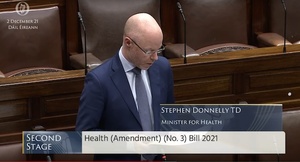 Minister for Health Stephen Donnelly announcing the new covid restrictions on travellers enetering the country. The vaccinated will need to be tested.

It Could Be You [Updated]

An Exhibition Of Himself

11 thoughts on “Deny The Passenger”