Unvaccinated players could be permanently sidelined from local competition as the Adelaide Football League makes its stance clear. Vote in our poll: https://t.co/WGdzjagDiS 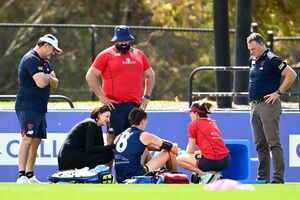 Melbourne’s return to pre-season training has ended abruptly for premiership star Jake Lever, who fainted on the track.

Lever collapsed on the far side of the ground at Casey, after a gruelling running drill.

The 25-year-old was immediately attended to by club medical staff, who huddled around him for about 20 minutes. Both coach Simon Goodwin and head of football Alan Richardson also showed concern for the defender’s wellbeing.

Losing count.
The silence of the football industry will scar like silence over child abuse.

Time For Your Booster