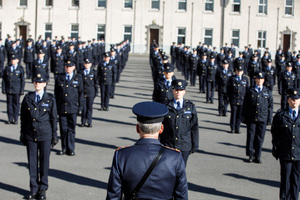 At the bill’s publication last Summer, the government stated:

‘In line with a recommendation of the Commission on the Future of Policing in Ireland, the Bill will provide a clear and transparent statutory basis for the existing police powers of search, arrest and detention, supported by statutory codes of practice.

It will also have a strong focus on human rights. This includes both the rights of suspected or accused persons, as well as the human rights of all members of society to live free from violence, abuse, crime and fear.’

Chairperson of the Policing Authority Bob Collins says the bill is “a once in a generation opportunity” to review garda powers.

But he warns against several measures it contains, including allowing senior gardaí to “issue a search warrant in urgent circumstances” – something he says only the courts should be allowed to do.

The authority also warns against increasing powers of arrest without a warrant, saying the provision is “excessive” and “radical”.

…the Irish Council for Civil Liberties (ICCL) calls for “more robust safeguards to protect … fundamental rights” in the legislation.

The council objects to provisions which would allow a suspect to be questioned before getting legal advice, and would also restrict access to a lawyer during questioning.

It also calls for the removal of a measure allowing detention periods beyond 24 hours.

And the council also opposes a measure allowing gardaí to decide on the admissibility of evidence in limited circumstances.

It says this power “should remain firmly with the Courts”.

The ICCL strongly recommends the removal of the power to compel a password when executing a search warrant.

Get In The Back Of The Van

16 thoughts on “Give Them MORE Power?”