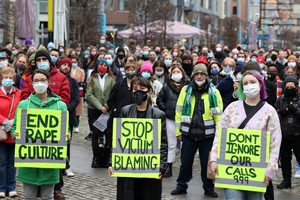 It had been my hope to keep these pieces light and amusing, but sometimes you can’t ignore events without seeming out of touch or grossly insensitive. The week was blighted by the horrific murder of teacher and sometime musician, Aisling Murphy, on a towpath in Tullamore, while out for a jog in the late afternoon. It goes without saying that this is a shocking event for any culture to bear.

Some women TDs reacted by calling for education for men and boys on abusive sexism in the culture, which is a good idea, education is always a good idea, but the reflex of generalizing such an event to suggest that all males of all ages are somehow implicated, by virtue of their sex, really does a disservice, not only to decent men and boys, but also to the hope of arriving at a more nuanced understanding of violence in the culture.

This idea of “not all men” featured strongly in the discussions on social media and in the press. In the Examiner, Eve McDowell, founder of Stalking Ireland, said it was time men became “more active” in changing the reality of women’s experience, but offered no tangible suggestions.

This question, what tangible actions can men take, was also posed by Mark O’Halloran, actor/writer on Twitter, the answers generally coming down to an appeal to “men” in general to be mindful of the spectrum of violence that begins with cat-calling, and to not contribute to this mild end of the spectrum behaviour that creates a climate of disregard for the safety of women.

In the IT Jennifer O’Connell acknowledged the mistaken reflex taken by some women to label all men as “predators”, when she wrote that while all men are not predators, “…all women know that they are potentially prey. This knowledge permeates many of our lives and curtails our choices in ways that may be difficult for men to understand.”

And that really is an insight and a target for education.

An article in the IT by Professor of Psychology at Limerick University, Orla Muldoon, shed light on the problem and offered real insights into what men can do.

Firstly, it appears that men who go on to commit crimes against women first commit what the professor calls “entry level” violence.

“Men who perpetrate life-threatening violence against women tend to build up to this point of their criminal careers. Perpetrators usually start with jeering, street harassment, exposure, groping. Yet we rarely intervene when men perpetrate entry-level violence.”

She cites an incident of such entry-level violence when a male student in a school took to exposing himself to female students. When the teacher went to report this, a male colleague laughingly described the student as “a legend”.

So, the answer to “what can men do” to alleviate this ongoing pressure on women is a very simple one. Stop being “thick” as a way of looking clever. In fact, that would be a valuable contribution across a range of social issues. Feigned thickness as a “clever” pose is not as cute as its practitioners seem to think it is, and it does untold harm in undermining the seriousness of certain social issues.

Orla Muldoon cites four general patterns of behaviour that create a climate in which violence against women takes place.

The first pattern is that it is almost always men who kill women.

The second pattern is entry level violence, referred to above.

The third pattern is that low level violence and harassment is a real problem for women, and barely a problem at all for men, to the extent that most ordinary men are likely to think that women are exaggerating the problem, since they themselves never experience anything approaching the level of intrusion and harassment that women experience.

The fourth and final pattern appears to arise from the fact that politics is male-dominated, and so the neglect of the seriousness of the levels of harassment endured by women is reflected in a dismal policy response, mainly due, it is supposed, since the majority of policy-makers are male, to a combination of not taking the problem seriously, as in the third pattern, reinforced by a generous dollop of thickness, the presence of which in the political fraternity few would deny.

“Not only has there been no policy response to the many concerns expressed, sometimes there is a systematic refusal to acknowledge there is even an issue.”

On Saturday, Michael Healy Rae suggested that pepper spray be legalised. But this idea was rejected by many women on the grounds that it put the onus on women to deal with what was essentially a male problem. Healy-Rae’s suggestion seemed kind of thick, actually, but seemed to arise from a genuine desire to help.

Orla Muldoon warns that until men see the role of these patterns in creating a climate that appears to encourage violence against women, while men cop-out on the assumption that the acts of violence are perpetrated by lone “mad” or “bad” men only, the problem of violence against women will continue, since the politically male-dominated society, by its failure to act or even see the problem, lends its tacit approval to the climate of misogyny that its neglect of the issue creates.

One of the more useful ideas that emerged from the discussions following Ashling Murphy’s terrible end, was the general acceptance of the idea of a spectrum of violence, from the supposedly innocent “joke” to actual violence.

Many people really don’t get this concept, and it is gratifying to see that this is now an accepted model, at least as used to describe the spectrum of violence against women. But the idea of spectrums of escalation can be applied across all issues.

Talking all this theory around such a tragedy may sound callous. To offset that I would like to offer my sincere condolences to the family and friends of Aishling Murphy for their loss. I do know, through personal experience, that bereavement is a kind of life sentence of loss, where passing time itself, far from being a healer, can itself be a source of recurring sorrow.

To forgive an act that would cause such suffering is beyond the capacity of most people, when vengeance seems like a more natural response. This is where acts of violence demean and distort everyone, creating a climate where violence answering violence may seem like the only credible reality.

Eamonn Kelly is a Galway-based  freelance Writer and Playwright.

71 thoughts on “Eamonn Kelly: What Can Men Do?”