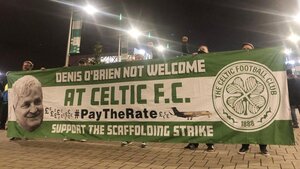 Workers at the British arm of Denis O’Brien’s Actavo [formerly Siteserv, a company bought by O’Brien under shady circs from the State, and subject of a state inquiry] protest at Celtic match over pay and conditions. O’Brien owns a substantial shareholding in the club. pic.twitter.com/Dwe4YfNHbg