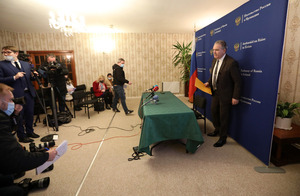 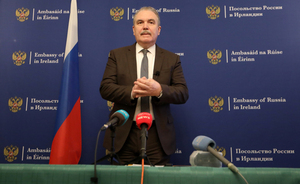 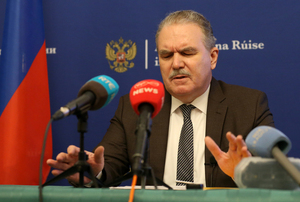 The Russian Ambassador to Ireland Yury Anatoliyevich Filatov hosts a press conference in the embassy over the current situation in the Ukraine and Russia’s plans to hold naval exercises 240km off the southwest coast of Ireland.

Ambassador Filatov complained of a “propaganda campaign” about a Russian threat to Europe and he said there are no plans for Russia to attack Ukraine or anybody else.

“It looks like the topic of the exercises fits in the ongoing propaganda campaign led by the US and its NATO to create an illusion over Russian threats to Europe.”

Ask the Ambassador why the Russian Navy has not paid the 160,000 Euro owed to Ireland after their last Naval exercise which polluted our seas in 2009. navy Admiral told me they would pay and 3 years later Ambassador said to me Russia would never pay. https://t.co/FjzvH5CeJU

Russian exercise off coast ‘not a threat’ to Ireland – Ambassador (RTE)

Yesterday: Keeping An Eye On Russia