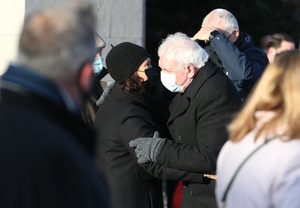 Regarding Pat Leahy’s article mentioning the funeral of my brother Chris Wall (“Is a half-embrace at a funeral a sign that Sinn Féin and Fianna Fáil will cosy up together?”, for the record, Mary Lou McDonald was there as a neighbour and Bertie Ahern as a long-time friend.

My brother’s funeral was not the forum for any political purpose.

2 thoughts on “Embrace Of Angels”