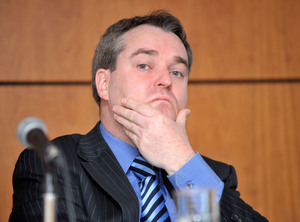 Robert Watt, Secretary General at the Department of Health

Under-fire Department of Health secretary-general Robert Watt this week jetted out to Dubai to attend a health and wellness expo, as controversy continues to rage over his €81,000 salary increase.

Mr Watt and Health Minister Stephen Donnelly are attending a massive international showcase in the heart of the United Arab Emirates.

It is understood they flew to the event in economy-class seats and are not staying in one of the more expensive hotels in Dubai.

“Robert Watt can’t turn up to a committee but can head off to Dubai,” Fianna Fail TD John McGuinnness said, in reference to Mr Watt’s decision on whether to appear before a joint Finance and Public Account Committee hearing on his controversial top-up.

It Does Seem Rather A Lot

‘We’ve Cut Everything To The Bone’