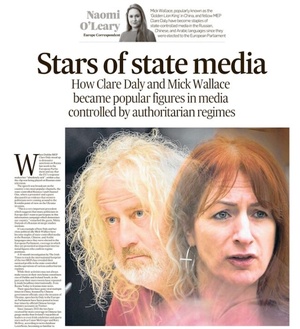 A poem inspired by the great work Niamh O’Reilly of the Dawkey Episcoplian has been doing of late to whip up support for World War Three. It is great to see said newspaper following in its own tradition by whipping up support for word war, just as it did in 1914.

She had, she thought, a thousand things to say
(after Edmond Jabé)

Of the Trinity school of journalese
she was a product.
And when they were told to
people bought her;
put her on their marble finish kitchen counters
and dreamed of world war three and four
and liked her monotone clack so much
they plopped another two Euro coin in the relevant slot
so they could hear once more
everyone she disagreed with
or whose fabulous hair she was jealous of
be called Chinese spies.

And all the other little journalesers
rushed in to squeak their weasel agreement
apart from the predictable elements
who were, naturally, just more Chinese spies.
As people like her tend to
she got what she wanted
lots of people saying her name
though not all of them pronounced it right
and some of them were barely people.
And, eventually, both world wars
three
and four.

And there were no more marble kitchen tops.
No more two Euro coins.
Nor slots to plop them in.
And, from her, no more squeaks.
Best of all there were no more four wheel drives
or children to drive to sporting events in them.
We all died happily ever after
apart from the Chinese spies and their acolytes
who died most unhappily.
But there’s no pleasing some people.