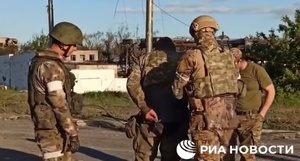 🇷🇺🇺🇦The Russian Defense Ministry publishes a video after reports of the surrender of 265 militants from Azovstal pic.twitter.com/2EZFaegFwM

Ukraine’s military said  it aimed to evacuate its remaining soldiers from their last stronghold in Mariupol, as fighters that have held out for 82 days began to surrender, heralding the end of Europe’s bloodiest battle in decades.

Reuters saw buses leave the huge Azovstal steelworks overnight and five of them arrive in the Russian-held town of Novoazovsk. In one, marked with the Latin letter ‘Z’ that has become the symbol of Russia’s assault, wounded men were lying on stretchers three bunks high. One man was wheeled out, his head tightly wrapped in thick bandages.

“The ‘Mariupol’ garrison has fulfilled its combat mission,” the General Staff of Ukraine’s Armed Forces said in a statement.

“The supreme military command ordered the commanders of the units stationed at Azovstal to save the lives of the personnel … Defenders of Mariupol are the heroes of our time.”

88 thoughts on “Stand Down”