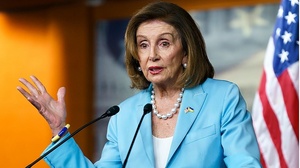 “The Good Friday Accords are the bedrock of peace in Northern Ireland and a beacon of hope for the entire world. Ensuring there remains no physical border between the Irish Republic and Northern Ireland is absolutely necessary for upholding this landmark agreement, which has transformed Northern Ireland.

“It is deeply concerning that the United Kingdom is now seeking to unilaterally discard the Northern Ireland Protocol. Negotiated agreements like the Protocol preserve the important progress and stability forged by the Good Friday Accords, which continue to enjoy strong bipartisan and bicameral support in the United States Congress.

“As I have stated in my conversations with the Prime Minister, the Foreign Secretary and Members of the House of Commons, if the United Kingdom chooses to undermine the Good Friday Accords, the Congress cannot and will not support a bilateral free trade agreement with the United Kingdom.

“Respectful of the will of the British people and of Brexit, I urge constructive, collaborative and good-faith negotiations to implement an agreement that upholds peace. The children of Northern Ireland, who have never known the bloody conflict and do not want to go back, deserve a future free of the violence where all may reach their fulfillment,”

Nancy Pelosi, Speaker of the US House of Congress.

Boris Johnson and I agreed on Northern Ireland. What happened to that good faith? | Leo Varadkar https://t.co/G2B8ODCJ6d

Be Advised, My Passport’s Green