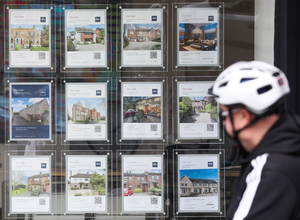 From top: We have a dysfunctional rental property market and a barely functioning home one, writers Derek Mooney

Just over a week ago Iarnród Éireann announced that it was no longer able to provide catering services on its Intercity network. With the exception of some Dublin/Belfast Enterprise trains, passengers will not be able to buy a cup of tea/coffee accompanied by a stale Kit-Kat or a half-filled sandwich.

Yes, we will miss the fun of seeing what items the catering service had managed not to pack on to those wobbly aluminium trolleys which dispensed hot water with all the force of a 56-year-old man with a swollen prostate… but as problems facing this country go, this isn’t a big one.

The problem has nothing to do with the complexities of providing a cup of tea on a train and – according to the catering contractor, Rail Gourmet – has all to do with the real difficulties it is having in finding staff to push the trolleys up and down the train.

Rail Gourmet says the problem is so acute that it cannot resolve it, and so Irish Rail must now organise a tender competition so it can hopefully restore this fairly basic service sometime in 2023.

To go off-track, so to speak… it does occur to me that it might be more efficient to franchise the catering service route by route, rather than across the whole network (though network does seem a glorified term to describe our national rail system!) with local caterers tendering individually for their nearest route and either buying or renting those trollies, which I assume either Iarnród Éireann or Rail Gourmet own and would be happy to sell or lease.

To return to my original direction of travel: while not being able to buy a coffee while sitting on the Rosslare train is a nuisance, the bigger problem is the shortage of labour to fill reasonably well-paying, low skilled jobs because people cannot afford to live in Dublin… or almost anywhere in Ireland.

It’s a problem that is not unique to Rail gourmet, or even the hospitality sector. It’s a problem I’ve discussed here before in talking about the soaring costs of living in the capital, particularly the outrageous cost of accommodation… but I know from feedback that this is no longer a Dublin-only problem.

For most of my early life it was much cheaper to rent than to buy. I was happy to rent and live in areas where I could not possibly afford to buy. I lived in the heart of Donnybrook for almost two decades in a small but comfortable, modern one-bedroom apartment where the rent rarely increased. I took responsibility for the upkeep and repairs. I saw the owner face-to-face maybe once every three or four years and only heard from them by phone or letter twice a year. I was a good tenant. They were a good landlord. When I departed they sent me a gift!

I accept that my situation was fairly unique. I moved into the apartment just before the property boom. The initial rent was a little high at the time (it was just a few quid below what I had been paying for a two-bed duplex in Ringsend,  but it very quickly started to look reasonable, and eventually feel quite low as the property market started to lift off. So, while rents all around me were starting to soar, mine stayed relatively fixed to the owner’s monthly mortgage repayments.

Given that we have such a dysfunctional rental property market and a barely functioning home purchase one you would imagine that government policy would be focussed on fixing these problems as speedily as possible – especially as we have come though nearly eight years of squandered opportunities.

You’d think so, but I do not see much sign of the speed or scale. Without a doubt there is increasing evidence of new sites and activity with more cranes on the skyline… the problem is that it is still not on the scale necessary. This is not some random analysis that popped into my prejudiced little head, it is the view of the IMF, who in their May 5th ArtIV mission statement on Ireland, stated:

‘Housing supply policies should be further strengthened, with a focus on boosting productivity in the construction sector and improving zoning and the permits processes.’

‘While the “First Home” affordable purchase shared-equity scheme (part of Housing for All) aims to support first-time home buyers, it does not address the key issue, which is the supply bottlenecks.’

(My emphasis in bold)

We need a major ramping up now, not only because it’s the right thing to do, but also because it’s the right thing to do politically. If housing is still the number one issue at the time of the next general election, then this government and many of the TDs backing it – particularly the Fianna Fáil and Green ones are toast (more on this point later).

Last September I wrote a piece about the government’s “Housing For All” where I welcomed the plan but said that:

….my big fear is that the target of addressing the crisis over 9-10 years, combined with a housing output delivery timeline that backloads the delivery does not convey a sense of Fianna Fáil fully grasping the scale.

Almost every day on social media and occasionally on the traditional media we hear Micheál Martin’s favoured Fianna Fáil representatives telling us about the latest increase in the number of housing starts and applications. All of this is real and welcome, but their optimism does not seem to allow for chronic shortage of bricklayers, plasterers, carpenters, and electricians.

I recently bumped into a colleague who had attended a Council briefing on housing. He said that it all sounded quite optimistic until you grasped the fact that the bulk of the units would not come available until after 2025 or 2026.

But coming from a political background I tend to look at these things from a  political perspective and wonder will seeing more sites opening up be enough to convince the public that the crisis has truly passed.

I don’t think it will. As a savvy back bench Fianna Fáil-er said to me pre 2020 general election, the only answer to the housing crisis is a set of keys. A site map or a fancy PowerPoint, is no replacement for the exquisite click of a key in your own front door.

Sadly, An Taoiseach and his supporters seem not to realise that there will be no electoral gratitude at the next general election for TDs or ministers who tell voters… look we solved the problem, you’ll only have to wait a couple more years to feel it.

That’s not the way politics works.

If housing he is one of the top issues at the time of the next general election, then this government will not be returned for a second term. I am not saying Sinn Féin will coast in… but that’s a more likely scenario than seeing this political combination back in office.

This prospect is not helped when the government seems unable to champion those things they are doing right. Some weeks ago Sinn Féin produced press releases around several provincial newspapers asserting that the government’s affordable housing targets for that county were “pathetic.” See this example from Limerick.

The example cited above makes it seem that the underwhelming targets had only been revealed to Sinn Féin after a Herculean effort that forced a reluctant Minister to reveal numbers he was desperately trying to hide. The reality is a lot less dramatic.

In the reply, the minister said, “from 2022 to 2026, over 28,000 affordable homes are targeted for delivery” but then proceeded to include a county-by-count table that lists “Delivery Targets from LA Lands or Advance Purchase 2022 – 2026”.

The total number of units in that table is 7550. That’s only 27% of the overall target, which is 28,000. So… which number does Sinn Féin use to denounce the government’s targets? It uses the ones in the table, which it knows account for only 27% of the actual target.

It is fair to call this Sinn Féin exercise mendacious but spare some opprobrium too for a government that is so politically inept as to hand its opponents a table of figures that is bereft of any political explanation or context.

If you do not have a table of the county-by-county affordable housing targets… then say so. Don’t offer your opponents the nearest thing, especially when it represents a quarter of the answer and not expect them not to beat you with it.

I didn’t support the formation of this government. I still don’t. I am not opposed to Fianna Fáil’s participation in government, but I think ignoring the verdict the people passed on the last Fine Gael government and then prolonging the government life of a Fine Gael party which squandered the recovery, is bad politics.

Whatever hopes there are of persuading people that this is a Fianna Fáil led government with Micheál Martin at the helm (and there are no signs that his appointment as Taoiseach has done anything to reverse his party’s declining support levels) there are no chances of that happening after December 16 when either Leo Varadkar, or his successor, takes over.

After that, this will become a Fine Gael led government that talks big and acts small. A government where spin trumps reality and where the second biggest party in government daily eats the middle-of-the-day lunch of the biggest party, as it competes with them for the support of farmers and homeowners who no longer have mortgages.

11 thoughts on “Derek Mooney: Happy The Opposition When The Government Cannot Get Its Own Achievements Right”