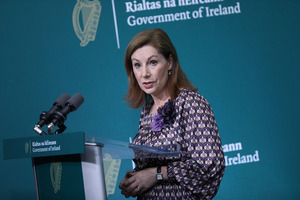 Minister of State for the Department of Education, with responsibility for Special Education and Inclusion, Josepha Madigan

This is a supplementary measure to ensure that while children await a new special class placement in a mainstream school, they can access a more sustained level of support in a setting with peers of their own age.

The Minister of State for Special Education has called a meeting of stakeholders this afternoon to discuss a controversial proposal to accommodate children with autism and other disabilities in the Dublin area in special temporary education centres from September.

Autism campaigners and school principals have reacted with shock to the decision, which was announced on Twitter by Minister Josepha Madigan.

Details of the plan – designed to address a severe shortage of school places in the capital – emerged last night.

Adam Harris of the charity AsIAm has said he is “truly shocked” by the plan which will mean “the segregation of autistic children from their peers”.

Mr Harris said his organisation estimated that there were at least several hundred autistic children across the country who have been unable to find a suitable school place for this coming September.

‘Gardaí Were Called, John Was Arrested, He Was Then Placed In The Homeless Shelter’

13 thoughts on “‘The Segregation Of Autistic Children From Their Peers’”