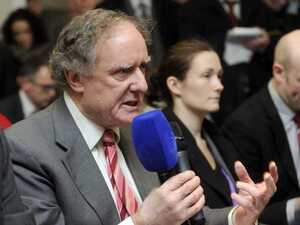 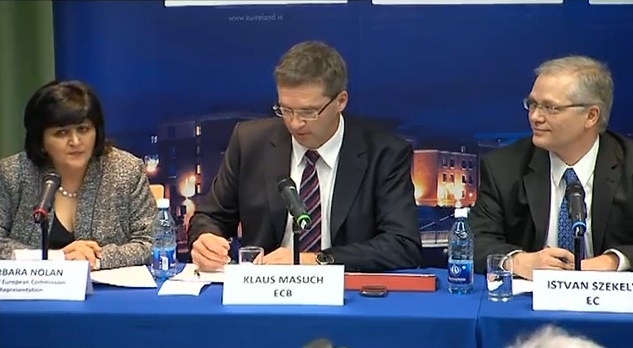 Early in the conference, Istvan Szekely said: “I’m impressed by the depth of the discussion in Ireland and the understanding of complex, economic financial-sector issues, which is revealed by looking into the Irish place, looking into the discussion. But also when I come from the airport with the taxi driver they are often very very informed I must say, very very informed.”

Vincent Browne: “Klaus Masuch, did your taxi driver tell you how the Irish people are bewildered that we are required to pay unguaranteed bondholders billions of euros for debts that the Irish people have no relation to or no bearing with, primarily to bail out or to ensure the solvency of European banks? And if the taxi driver had asked you that question,hat would have been your response? That’s my first question.”

Barbara Nolan: “Well, well, well, can we take a couple together? Can you ask the second question?”

Nolan: “Right, can I ask you then to pass the mic, and we’ll come back to you for the second question?”

Browne: “Well, if you don’t mind, that’s a way of breaking up the exchange, and I would prefer if it went this way: We’ve a tradition in Irish journalism that we pursue issues and that when somebody doesn’t ask [answer] a question we follow through on it and I hope that tradition will be respected on this occasion. So could you answer the question?”

Masuch: “I have answered a very similar question of you – I think it was two reviews ago – and can…”

Masuch: “… and I answered it. I can understand that this is a difficult decision to be made by the government and there’s no doubt about it but there are different aspects of the problem to be, to be balanced against each other and I can understand that the government came to, came to the view that, all in all, the costs for the, for Irish people, for the, for the stability of the banking system, for the confidence in the banking system of taking a certain action in this respect which you are mentioning could likely have been much bigger than the benefits for the taxpayer which of course would have been there. So the financial sector would have been affected; the confidence of the financial sector would have been negatively affected, and I can understand that there were, that there was a difficult decision but that the decision was taken in this direction.”

Masuch: “I think I have addressed [looking to Barbara Nolan] the question.”

Browne: “You didn’t answer the question the last time so maybe you’ll answer it this time.”

Nolan: “Well, I think he doesn’t have anything to add to what he’s already said. Can I.. [pointing at another questioner]”

Manusch: “Well, I think I have addressed the question.”

Browne: “You’ve nothing to say. There’s no answer, is that right? Is that it? No answer?”

Manusch: “I have given an answer”

Browne: “You have given an answer that didn’t address the question.”

Browne: “That is my view and I think it would be the view of the taxi driver and a few of our viewers tonight.”

Nolan: “Right. Can we please move on?”