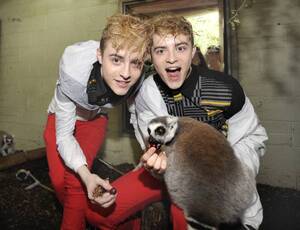 “I started arguing with people on Twitter calling themselves LauralovesJedward or GemmaGrimes. One girl from Dublin accused me of hating the Irish and said she deleted my album.

“Then people started copying in Jedward fan groups – like the Jedheads – and started spreading the word not to follow me.

“I was in a Tweet debate for four hours. One person told me not to have a go at them because they would write their own songs one day when they’re ready.

“I said I’d cover one of their self-penned songs and do a rendition of Ghostbusters, but the irony was lost on their fans when they told me I’d ruin it.”

Example – who currently has 24,000 followers compared to JOHN and EDWARD‘s 57,000 – finally admitted defeat by writing: “Jedwards fans – the reason I’m not as big as Jedward is cos I didn’t sleep with Louie (sic) Walsh. Maybe next year with a bit of luck.”

Rapper Example gives the word from the Tweet (The Sun)

(Pic by Photocall) It’s not a beaver. It’s a Lemur.