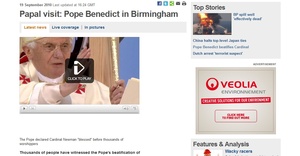 So, the six London men arrested in a suspected ‘terrorist plot’ against Pope Benedict XVI were released without charge late Saturday night.

But look closely at this screen-shot of another article about the Pope’s British visit on the BBC News website, taken yesterday afternoon. Notice anything strange?

That ad on the right perhaps? For Veolia: the cleaning company contracted by Westminster Council. The company whose name was bandied about for all the wrong reasons lately as the employer of all six alleged ‘terrorists’.

How To Get The Pope To Accept Your Resignation