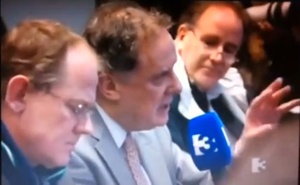 We have no idea. If anyone has any suggestions…

Having invited Brian Cowen onto his show for the umpteenth time in three years, and had the invitation turned down yet again, Vincent Browne turned up at the press conference in Government Buildings last night and comprehensively pwned the taoiseach.

VB: You don’t think that you’ve contributed to the screwing up of this country?

BC: I don’t accept your contention – the premise of your question – that I am the bogey-man you’re looking for, no.

VB: Who else in public office bears anything like the responsibility for the devestation caused to this country than you?

BC: I don’t accept that…etc.

VB: The reality is – and everybody but you seems to know this – you’re a liability, not just to your party, not just to your government, but to the country, because nobody believes you…people know you’re the guy most responsible for the chaos that’s been caused. Don’t you owe it as an act of patriotism to the Irish people to get out now?

BC: Sorry Vincent I don’t accept the premise of what you’re saying…

You will recall Vincent handed Bertie Ahern his own ass in 2007:

Meanwhile, back in the editing room.

The Face We Present To The World