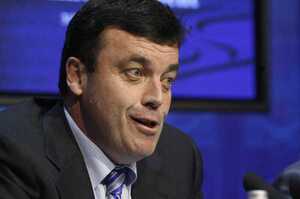 The Cowen/Lenihan government – which has been wrong about everything on the economy – is putting its faith in blind optimism….This is blind and pathetic optimism, because it is based on the same three-card trick, the same bluff and gamble that got us here in the first place. In short, they have learnt nothing at all.’

Yes. Not bad, David. But this is how you tear Brian Lenihan a new one:

‘…on Prime Time , Lenihan announced that the entire banking system would be restored to “the greatness it once had”. Oh dear God – he really means “greatness”.

And the greatness our banking system as a whole once had? The cronyism of overlapping boards? The grotesque salaries and bonuses for people who proved so wildly incompetent? The revolving doors through which regulators became bankers and vice versa? The cooking of the books?

The terrifying thing about all of this is the mentality it reveals. It helps explain why Brian Lenihan has made so many disastrous decisions and why he still can’t face up to the reality that the banks played him like a violin’.