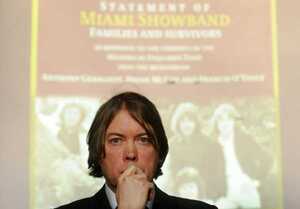 David O’Toole, nephew of Fran O’Toole, of the Miami Showband, at the launch of the HET Report into the killings at Buswell’s Hotel in Dublin this morning.

The families of three men shot dead in the Miami showband massacre have said a report into the killings indicates an RUC Special Branch agent was involved.

Three members of the band were shot dead in July 1975 after their minibus was stopped by a fake army patrol.

The HET report found that UVF man Robin Jackson had been linked to one of the murder weapons by fingerprints.

Jackson claimed in police interviews he had been tipped off by a senior RUC officer to lie low after the killings.

Police headquarters was told about that, but nothing was done.