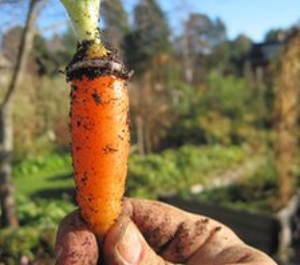 A Swedish woman has discovered her wedding ring on a carrot growing in her garden, 16 years after she lost it, says a newspaper.

Lena Paahlsson had long ago lost hope of finding the ring, which she designed herself, reports Dagens Nyheter.
The white-gold band, set with seven small diamonds, went missing in her kitchen in 1995, she told the paper.

She took the ring off to do some Christmas baking with her daughters, but it disappeared from the work surface where it had been left, she explained to Dagens Nyheter.

The family searched everywhere and years later took up the tiling on the floor during renovations, in the hope of finding the ring.

It was not until 16 years later when Mrs Paahlsson was pulling up carrots in her garden that she noticed one with the gold band fastened tightly around it.

Did You Drop These Envelopes?