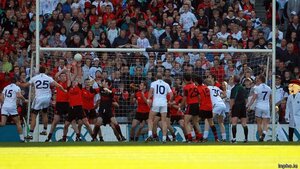 As if the Meath/Louth fiasco wasn’t bad enough (which led to an unprecedented level of audience participation).

This time it’s Kildare who took the hit, as both umpires somehow failed to notice Benny Coulter dawdling in the square while the ball made its way towards him.

At least he admitted as much after the match.

Coulter admits he was in square.

We’re just worried that he’ll convince his brother Phil to write a wee tune about it.