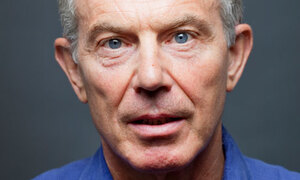 Tony Blair’s memoir, A Journey, is out today and it has a chapter on Ireland. No mention of Bertie from the snippets we’ve got but he does wax on about:

Paisley: “Once, near the end, he asked me whether I thought God wanted him to make the deal that would seal the peace process. I wanted to say yes, but I hesitated; though I was sure God would want peace, God is not a negotiator. I felt it would be wrong, manipulative, to say yes, and so I couldn’t answer that question, that only he could and I hoped he would let God guide him.”

Adams and McGuinness: “They were an extraordinary couple…Over time I came to like both greatly, probably more than I should have, if truth be told. They were supreme masters of the distinction between tactics and strategy. They knew the destination and they were determined to bring their followers with them, or at least the vast bulk of them.”

Sinn Fein/IRA “I came to the view that the SF/IRA relationship was a bit like that of the Labour leadership and the Labour party NEC [national executive committee]: yes the leadership is powerful, yes it usually gets its way, but not always and rarely without a lot of persuasion and negotiation.”

I Knew Brown Would Be A Disaster (Guardian)

Derry Bomb Had 200lb Of Explosives