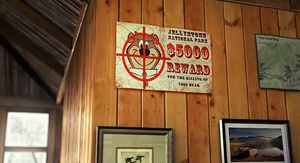 Animator Edmund Earle put together this alternate ending for the live-action/CGI-hybrid adaptation of The Yogi Bear Show in his spare time, basing it on this scene from The Assassination of Jesse James by the Coward Robert Ford.

Don’t show it to anyone under ten.