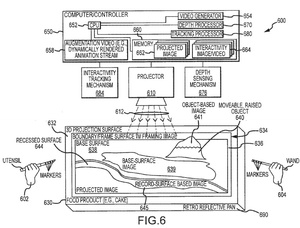 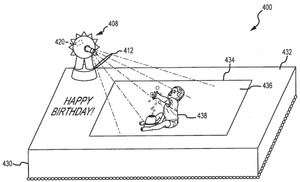 According to a US patent application lovingly titled “Projector systems and methods for producing digitally augmented interactive cakes and other food products”, the imagineers at Disney seem to be hatching plans for interactive cakes.

The application includes a set of hilarious illustrations depicting over-sized cameras projecting images and video onto the surface of baked goods in order to promote storytelling and / or interactivity that is unique and individualized. Disney envisions images mapped to the 3D topography of the cake allowing it to sense, for example, when a slice is in the process of being cut (initiating a sword fight with Captain Hook) or removed (water rushes in to fill the void).