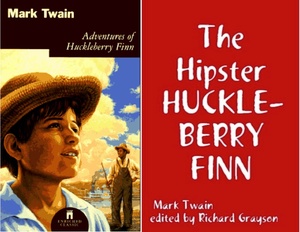 Mark Twain scholar Alan Gribben and NewSouth Books have released a new edition of the Mark Twain classic Huckleberry Finn, with, among other adjustments, the book’s infamous 200 instances of the word ‘nigger’ replaced with the word ‘slave’. Cue inevitable ‘political correctness gone mad’ furore, in the wake of which author Richard Grayson has come up with his own version: The Hipster Huckleberry Finn, with all the n-words replaced with the word ‘hipster’.

Jim was monstrous proud about it, and he got so he wouldn’t hardly notice the other hipsters. Hipsters would come miles to hear Jim tell about it, and he was more looked up to than any hipster in that country. Strange hipsters would stand with their mouths open and look him all over, same as if he was a wonder. Hipsters is always talking about witches in the dark by the kitchen fire; but whenever one was talking and letting on to know all about such things, Jim would happen in and say, “Hm! What you know ’bout witches?” and that hipster was corked up and had to take a back seat.

Are You A Hipster?

Are You Going To Body & Soul?