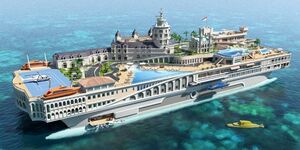 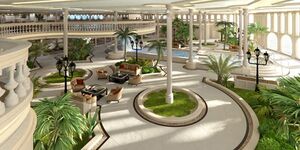 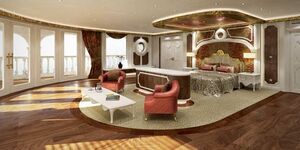 The staggering ‘Streets of Monaco’ is a 155-metre long hyper-yacht featuring swimming pools, tennis courts and a number of landmarks usually only found within the 0.78 square mile playboy’s playground.

At the centre-fold of the incredible ship is The Atrium which links the upper and lower living areas. The Atrium has seven guest suites which all include their own reception room, bathroom, dressing room, bedroom and balcony.

The super-rich owner of The Streets of Monaco would get the benefit of the main apartment spread over three floors, sprawling an amazing 1,460 square metres.

While only at a design stage, The Streets of Monaco would likely exceed the £665 million price-tag rumoured to be paid by Roman Abramovich for his ‘Eclipse’ yacht to become the world’s most expensive personal boat.

Buy it, deserve it.