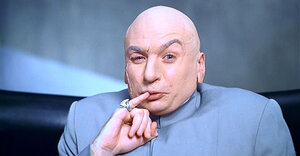 Youtuber Craig Rowin recently posted a video asking millionaires to give him a million dollars ‘because it would be awesome.’

Last Sunday, he released a follow-up video. On February 2nd – unless the internets are lying (and, in fairness, they’ve hardly ever been known to do that) – a millionaire will give him a million dollars.

You Tube: The Arse End

YouTubeTime Machine: Because There ARE Enough Hours In The Day

The Best Of The GIF Sound Subreddit