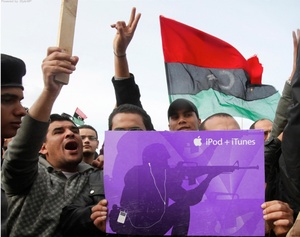 Putting the uprising aside for one magical day, thousands in the town of Misrata celebrated the opening of Apple Store #323.

“We know a thing or two about revolution,” said Ron Johnson, Apple’s Senior VP of Retail, who cut the ribbon amid celebratory gunshots by the excited citizenry. “So our bond with the Libyan people runs deep.”

While there is definitely excitement in the air — along with the occasional streak of tracers — Apple is by no means getting a free ride in Libya. Opening in just two weeks is Microsoft Store #8, which panders to the pro-Gadhafi crowd massing arms in Tripoli.

Microsoft says it has a “winner” in a theme that will appeal to government supporters and those too afraid to leave their homes: Microsoft: Making the status quo more tolerable than ever.

‘As A Ginger I Feel Unwanted’