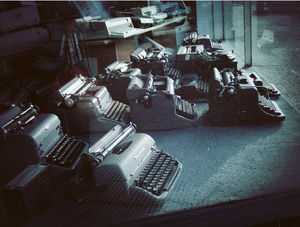 Typewriters will no longer be produced anywhere in the world. Mashable.com tells us:

The last company on earth to produce the typewriter — Godrej and Boyce — has shut down its production plant in Mumbai, India, according to reports that, fittingly, are making the rounds via the Internet.

The company’s general manager, Milind Dukle, told India’s Business Standard newspaper: “We are not getting many orders now.”

The announcement ends a long run for the device, which was once a mainstay of office life. A prototype of the typewriter was introduced in 1714 by Henry Mill, but the first mass-produced typewriter came in 1868 when Christopher Latham Sholes, a printer-publisher from Milwaukee, Wisconsin, patented the device.

The typewriter hit its peak of production in the 1950s when Smith-Corona sold 12 million of the machines in the last quarter of 1953. But, thanks to the encroachment of the personal computer, only about 400,000 typewriters had been sold annually by 2009.

As a farewell salute to the typewriter, here’s Jerry Lewis with an imaginary one.