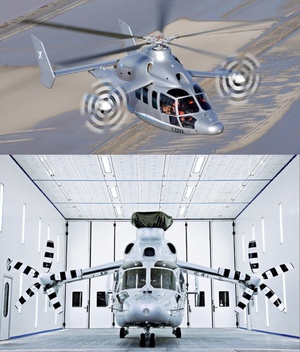 Smaller than Her Maj’s Helicopter, less bulletproof than Obama’s helicopter, the experimental Eurocopter X3 is nevertheless the fastest helicopter ever built.

Most helicopters have a top speed of 130 or 140 knots, which works out to about 160 mph. With the seemingly simple addition of two turboprops mounted on little wings, the Eurocopter X3 prototype hybrid helicopter has managed to make it to 267 mph in stable, level flight.

That’s Dublin to Cashel – or Moneygall – in less than half an hour. Time is money, people.