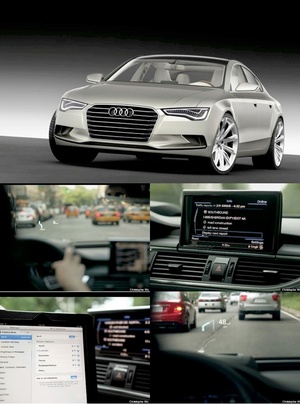 The 2012 Audi A7: fully-equipped for just a shade under $60,000 and on sale as of the first week in July, the A7 is a tech-lover’s dream car, with several totally integrated technological features, such as: 3D Google Earth aerial views on the above-dash GPS-system; a “Head-Up Display” that projects speed and turning directions onto the windshield in the driver’s line of vision (so that the driver doesn’t have to look down, thus keeping his head up); In-vehicle WiFi connectivity for up to 8 devices. a touchpad system with handwriting recognition, allowing the driver to write out phone numbers, addresses, or the names of restaurants, hotels, and more with his pointer finger.