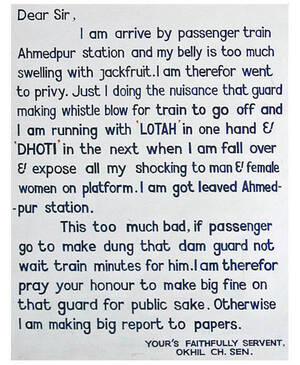 From Letters Of Note:

In 1909, an embarrassed, angry young man named Okhil Chandra Sen sent an unintentionally amusing letter of complaint to the Sahibganj divisional railway office in West Bengal. According to the Railway Museum in New Delhi, the subsequent investigation into the affair by the British Raj resulted in the introduction of toilets to all trains in the country; something that had been absent since the formation of Indian Railways in 1857.

Not Waiting For The Train