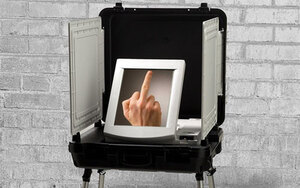 SUGGESTIONS ARE to be drawn up early next year for the disposal of the 7,000 unused electronic voting machines that have so far cost taxpayers €54.7 million.

Minister for the Environment Phil Hogan has asked the taskforce, which was set up to supervise the winding down of the project, to outline proposals soon for their disposal.

The machines have long been the source of controversy and ridicule among politicians and the public because of the project’s failure and the escalating cost involved.

Strongly defending their introduction, the then taoiseach Bertie Ahern told the Dáil in 2007 that by not adopting the new technology “this country will move into the 21st century being a laughing stock with our stupid aul pencils”.

1) Melt ’em
2) Sculpt ’em into the shape of Bertie Ahern’s nose
3) Stick it on the Hill of Tara so we NEVER FORGET.