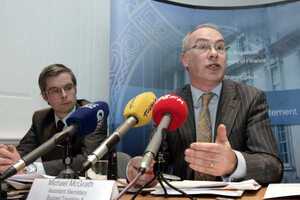 As the great British economist John Maynard Keynes once said: ‘If you owe your bank a hundred pounds, you have a problem. But if you owe a million, it has.’

THE UNIVERSAL social charge and the pension levy boosted the State’s tax take by €2.3 billion to €34 billion in 2011, but the Department of Finance conceded yesterday that revenues fell slightly short of their target.

The State ended the year almost €25 billion in the red, compared with €18.7 billion last year. The figure included a €9.5 billion bill for recapitalising the banks.

The final tax take of almost €34.3 billion was €873 million short of the €34.9 billion target set in Budget 2011, according to the December exchequer returns, which the Department of Finance published yesterday. Michael McGrath, assistant secretary at the department, said the additional €2.3 billion raised during the year included revenue from two extra taxes.

EirPocalypse Now: They’re Onto Us