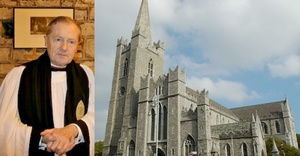 THE DEMORALISED state of the Catholic Church in Ireland “may have something to do with its lack of ecumenism”, the Very Rev Robert MacCarthy (71), Dean of St Patrick’s Cathedral in Dublin, has said.

“While I have been happy to welcome the present Roman Catholic Archbishop of Dublin as a preacher here, I have to say that there has been no reciprocal invitation to the Pro-Cathedral,” he said.

Ecumenism in Dublin seemed “to be equated to fellowship between the two archbishops; that should merely be the first step”, he said in his final sermon as dean at evensong in St Patrick’s yesterday. He steps down from the position on Wednesday.

Last month he announced his retirement as life had been “made more difficult” for him by the attitude of some members of the cathedral chapter and board.

“They have not supported me all along and they can find someone else to carry on,” he said.