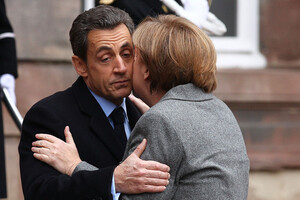 “Once I knew a yappy poodle,
I ate it in a meaty strudel”

FRENCH PRESIDENT Nicolas Sarkozy has dismissed as “undemocratic” Berlin’s call to appoint an EU “budgetary commissioner” to Greece with powers to veto any government spending that knocks its rescue programme off track.

The controversial call has caused consternation in Greece, but Chancellor Angela Merkel insisted last night that Athens had already agreed in principle to such oversight last year.
“Greece’s recovery plan can be implemented only by the Greeks,” said Mr Sarkozy in Brussels last night. “No country can possibly be placed in trusteeship. It would not be reasonable, democratic [or] efficient.” While Mr Sarkozy insisted Chancellor Merkel was in agreement with him, one door down the German leader was sending a very different signal.

After striking a moderate tone on her arrival in Brussels, she stepped up her calls for extra financial oversight of Greece last night, in line with a paper circulated by Berlin last week.

“Countries not sticking to their programmes create a certain frustration in countries that are financing them and raise the question about oversight,” she said.