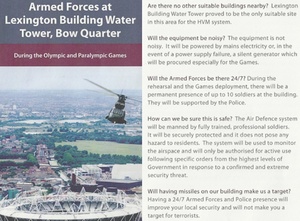 An east London estate, where 700 people live, has received leaflets saying a “Higher Velocity Missile system” could be placed on a water tower.

A spokesman said the MoD had not yet decided whether to deploy ground based air defence systems during the event.
But estate resident Brian Whelan said firing the missiles “would shower debris across the east end of London”.

If one of those things is ever fired, either in anger or by accident, it’ll shower white-hot supersonic shrapnel across the extremely crowded residential heart of a city.

London 2012: Missiles May Be Placed At Residential Flats (BBC News)