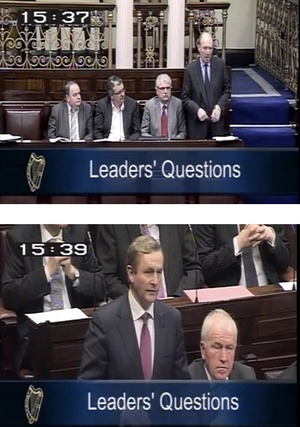 Francois Hollande, if elected on Sunday as French President, has promised to renegotiate the fiscal compact treaty. Where will that leave our vote? Shane Ross asked Enda Kenny during Leader’s Questions in the Dail today. A question the Taoiseach literally does not answer.

Shane Ross: “There appears to be a problem of timing. Because parallel with the Government’s launching their campaign, throughout Europe, there is a growing clamour, an increasing clamour for economic growth. And nowhere is that more apparent than in France where Francois Hollande is leading the campaign for growth and has stated, more ominously I think for some, that he will not sign. And I quote “the Fiscal Treaty as is”. He has also stated quite emphatically that he will renegotiate that Treaty. Now my suggestion to the Taoiseach is this. In view of the fact that other nations throughout Europe are waiting to see the results of the French presidential election, and the probably winner is Monsieur Hollande. In view of the fact that only three, only three at this stage, have ratified that Treaty. Would the Taoiseach not. Because Ireland’s primary interest now is growth. Would the Taoiseach not join with those forces in a campaign to install, within that Treaty, growth measures, as are being suggested and championed by others in Europe, who are likely to be in Government this time next week?”

Kenny: “Might I say to Deputy Ross, since it became my privilege to attend the heads of governments meetings last March at the, at the Council of Europe, it was perfectly obvious that the issue that was missing from the agenda was one of growth and investment and opportunity. And not just myself but a number of other leaders consistently raised this to the point that it is now a fixed item on every council, on every council meeting agenda. The last meeting dealt with youth employment, small and medium enterprises and there will be further reports I think at the May meeting and at the June meeting, in respect of those issues. Deputy Ross it’s not for me to interfere in anyway with the comments or the statements made by other political leaders or political parties in the final days of a presidential election in France. Or, indeed, in the election process in Greece, which takes place on the same date. And I understand there are a number of regional elections also in Germany on the same date.  So these, these, these parties and candidates are quite entitled to their views. I’ve said already today Deputy Ross that I welcome any political leader, any government leader in Europe who now joins, as you call it, the clamour, for growth and for investment as a fixed item on the council agendas. In that sense, you’re aware that the Treaty was signed by President Sarkozy. And the question of an addition to the Treaty, in respect of growth and investment and jobs and opportunities, is one obviously that, as a principle, I would support strongly. Now that doesn’t change the Treaty. But the addition focused on growth and investment, depending on the issues in there, is one that, as principle, I can support. Clearly we’ve already made known our views on corporation tax rates and financial transaction taxes and so on. There’s a principle, yes of course, leaders who join in the, in the, in the  focus of having an agenda on investment and growth, that’s to be supported. But it’s not for me to interfere in statements made by Monsieur Hollande or President Sarkozy or anybody else who are conducting their own electoral process at the moment.”

Ross: “Thank you, Taoiseach, for your reply. The point I’m making is, it’s not in the Treaty. And Monsieur Hollande wants it in the Treaty. And the Government is now campaigning for a Treaty which may not be relevant in a few weeks time if Monsieur Hollande, and other leaders, get their way. Would the Taoiseach not realise that it might be better to defer the referendum, as other countries are deferring their ratification, in anticipation, or as a cautious move in case this happens. Otherwise we shall be, I suspect, jumping the gun. Because growth is very, very important. It’s possibly more important to Ireland than any other nation in Europe. And it’s even more important now and I’d remind the Taoiseach that last week, last Friday, the Department of Finance finally, after many months of delaying, decided to downgrade the growth forecast for this nation from 1.3%, on which it and the Government had stood for many months when nobody else believed it, to 0.7%. So growth is now even more important because it’s gone lower and its forecast has been lower than it was in the 1.3% figure which were, which was the figure on which the Budget was based in December.”

Kenny: “Well I’d remind Deputy Ross that the Minister of Finance always pointed out that there’d be a review of the growth figures as set out. And, as Deputy Ross, is well aware these things are subject to a whole criteria before being finalised. But it’s also a fact that growth has returned to the Irish economy for the first time in quite a number of years. That the figures in respect of the Live Register and the Exchequer returns for the last number of months show a measure of confidence heading in the right direction. I’m not going to go so far as others did in the past but it is heading in the right direction despite the scale of the challenges that we face. I agree. I agree, Deputy Ross that growth is absolutely fundamental to what it is that we have to do here. That’s why the plan set out by Government and the projections, set out by the Minister for Finance, are based on growth, are based on growth and opportunity and investment. And I’d..Just in case..I’m quite sure you’ve read this thing on many occasions but Article 1 of the Treaty actually says “..to strengthen the coordination of economic policies and to improve the governance of the euro area, thereby supporting the achievement of the European Union’s objectives for sustainable growth, employment, competitiveness and social cohesion.” That’s actually what the Stability Treaty is about. And that’s why the opportunity now exists and will present itself on the 31st of May for the people of our country to make a decision as to which road they want to take. Now the road to Yes is one of stability, permanence, guaranteed access to funding, opportunity, investment and jobs. The road to No undermines confidence, undermines confidence, causes confusion and is a step certainly into the unknown for many people. I do not want the Irish people to make that decision. I want them to send out a message of confidence, of courage, of belief in the Euro, in the Eurozone but more importantly, in our own country. That the stream of investment into this country be not damaged in any way….”

That Timeline Of Confusion In Full

Let No Man Write My Epitaph; For As No Man Who Knows My Motives Dare Now Vindicate Them