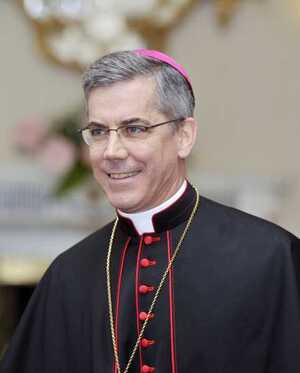 Heads turned when Archbishop Charles Brown, the new papal nuncio, arrived wearing his pectoral cross. He was approached by well-wishers, which was something of a contrast to the picket outside the Nunciature.

The Manhattan-born Brown told me that he has traced his ancestors, on both sides, to east Clare, “and to Gort, which I know is not in Clare, but in Galway, right?” He said that he had a wonderful time in west Cork on Saturday, when he visited Leap. On Sunday he was back in Dublin to meet up with his old friend, David Rosen, the former chief rabbi of Ireland. Rosen is now based in Jerusalem.

Archbishop Brown became embarrassed when the issue of him being referred to as “the George Clooney of the Diplomatic Corps” was raised. “Oh, I just pray my rosary,” he said.

Wouldn’t happen in Madam’s day, in all fairness.