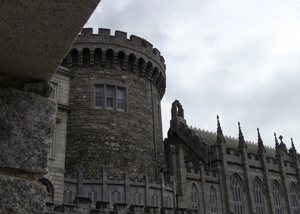 Last week, the Oireachtas ‘tested plans’ to use the heavily fortified Dublin Castle as an ‘alternative venue’ in case of an ’emergency’.

Officials at the Houses of the Oireachtas have confirmed the exercise was part of its “business continuity management” plan in case the Dáil Chambers suddenly become unavailable.

The plan involves using the ceremonial rooms, such as St Patrick’s Hall, as a Dáil chamber, while connecting rooms could be used as temporary bases for political parties.
IT equipment has also been tested to see if it could replicate the computer systems used in Leinster House and print out official documents for the smooth running of the Dáil.
But what kind of emergency might prompt such a move?

“It could be any unforeseen event,” said one official, declining to speculate further.

Enda Kenny Has Just Delivered This Speech In The Dáil