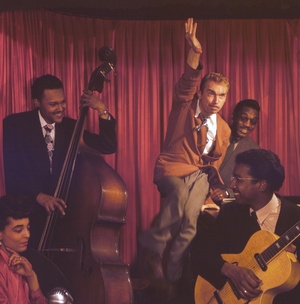 Long before skinny jeans, when vinyl was shellac and all bikes were fixies, there was Harry Gibson: the substance-abusing boogie-woogie stride pianist who first coined the term ‘hipster’.

Discovered by Fats Waller in 1939, Gibson – a precursor to the Beat Poets – played the jazz clubs of Manhattan as Harry ‘The Hipster’ Gibson until 1945.

In 1947, the controversial lyrics of his song ‘Who Put The Benzedrine in Mrs Murphy’s Ovaltine’ (set to the 1938 Max Fleischer Betty Boop cartoon classic “Sally Swing” above) resulted in all of his music being banned from radio play.

Putting the Rock Into Rock-A-Bye Baby