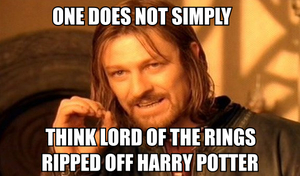 Earlier this week, IMDb user brian_007 (either joking, trolling or, God forbid, neither) wrote a long comment in the IMBb message boards regarding Peter Jackson’s upcoming The Hobbit: An Unexpected Journey, wherein he expounded his (ahem) theories about Tolkien, LOTR, and the Harry Potter series, attracting 100 comments until the post was deleted.

But not before being screencapped: 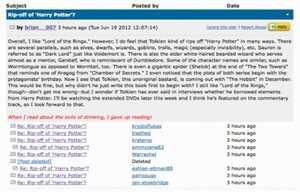 Overall, I like Lord of the Rings. However, I do feel that Tolkien kind of rips off Harry Potter in many ways. There are several parallels, such as elves, dwarfs, wizards, goblins, trolls, magic (especially invisibility), etc. Sauron is referred to as “Dark Lord” just like Voldemort is. There is also the elder white-haired bearded wizard who serves as a mentor, Gandalf, who is reminiscent of Dumbledore. Some of the character names are similar, such as Wormtongue as opposed to Wormtail, too. There is even a gigantic spider (Shelob) at the end of “The Two Towers” that reminds one of Aragog from Chamber of Secrets. I even noticed that the plots of both series begin with the protagonists’ birthday. Now I see that Tolkien, this unoriginal bastard, is coming out with The Hobbit in December. This would be fine, but why didn’t he just write this book first to begin with? I still like Lord of the Rings, though–don’t get me wrong–but I wonder if Tolkien has ever said in interviews whether he borrowed elements from Harry Potter. I’ll be watching the extended DVDs later this week and I think he’s featured on the commentary track, so I look forward to that.

Fancy Listening To The Entire Score Of The Hobbit Right Now?