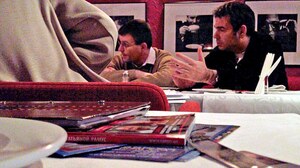 The Irish Mail on Sunday obtained a copy of a video shot in Kiev in January featuring Seán Quinn Jnr (right), his cousin Peter Quinn (left) and some Ukrainian associates. It includes:

Seán Quinn Jnr demanding $100,000 in cash that day and saying they are ‘unhappy’ they have ‘not had our five million’;

Peter Quinn requesting a safety deposit box in Kiev because ‘we can’t get $100,000 into Ireland’;

Peter Quinn telling a Russian-speaking businessman: ‘I’m not going to make your position stronger until I get the money;

Peter Quinn stating: ‘I am in breach of Irish injunctions, which you are aware of’.

Sensational Film Reveals Quinn Family Trying To Do Deal In Kiev And Get Cash Back To Ireland After Court Froze Assets (Michael Farrell, Mail on Sunday)

They Threw The Good Book At Him

Anything Good In The Impartial Reporter?

Are You Hot For Sean Jnr?