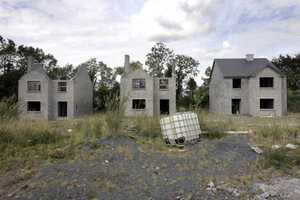 Above: ‘The Beeches’, Roosky, Co. Leitrim

ONE IN 10 unfinished housing estates identified last year by the Department of the Environment has been completed or made safe, new figures show.

Of the 2066 ghost estates identified last year, 211 have been ‘resolved’ but only 75 of these have been ‘taken in charge’ ie. completed to the satisfaction of the local authority.

The rate of resolution of estates has varied widely. Almost a quarter of those that have been successfully dealt with, either through completion or safety work, are in Dún Laoghaire-Rathdown, yet this local authority had one of the lower levels of unfinished estates at 61, of which 45 have been satisfactorily addressed.

In Roscommon, 235 problem estates remain unresolved and just 14 have been dealt with. Of Sligo’s 237 unfinished estates, just four have now been completed or made safe.

One In 10 Ghost Estates Completed Or Made Safe (Olivia Kelly, Irish Times)