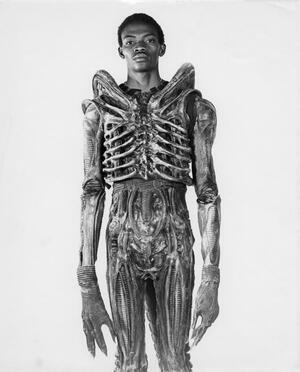 Back in pre-CGI 1979, the Alien xenomorph (in the few scenes where its entire figure appeared in shot) was played by 6’10” Nigerian actor Bolaji Badejo.

Here he is, during production in a corridor of the Nostromo, practising creepy xeno-moves (agreed during a meeting with HR Giger) wearing a mocked-up alien head.

The actual articulating special effects helmet, as Badejo explained to Cinefantastique magazine in 1979, was the only downside of playing the part:

[The special-effects helmet] was all manual, remote controlled […] There’s still a space in it for my head. I had it on just to make sure nothing goes wrong with the posture of the head or how tall it is in comparison to the other sequences. They must have had about 2000 tubes of K-Y Jelly […] just to get the effect of that slime coming out of his mouth. A lot of it was spread around on the face. I could barely see what was going on around me, except when I was in a stationary position, while they were filming. Then there were a few holes I could look through.

The Worst IMDb Profile Ever

They Sweated For All Of Us