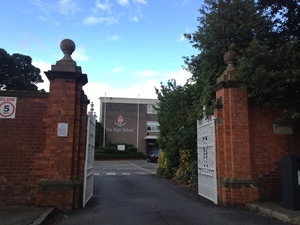 THE PARENTS of more than 100 former pupils at a Dublin fee-paying school say they will take legal action over the suspension of nearly the entire Leaving Cert class shortly before the exam this year.

Some 113 of the 120 sixth-year pupils at the High School in Rathgar were suspended on May 18th after an incident on May 4th in which they locked themselves into the sixth-year common room for 55 minutes and played dance music.

In a text message sent at 8pm on May 18th the pupils were told their lessons had been concluded for the year, and they could attend the school only by appointment until the Leaving Cert exam started on June 6th. There were 2½ days of lessons remaining.