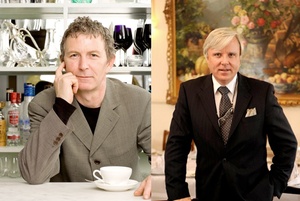 A group of tourism and catering experts more used to catering to the most privileged in Ireland will be helping some of Ethiopia’s least privileged next week by letting them in on the tricks of the tourism trade.

Chef Kevin Thornton, who owns and runs a Michelin-starred restaurant, and hotelier and television presenter Francis Brennan, who owns the Park Hotel in Kenmare, are leading a 14-strong team of people with backgrounds in tourism, catering, marketing and crafts.

The voluntary trip is organised by Connect Ethiopia, a charity that uses the skills of Irish business people to help their Ethiopian counterparts. They are focusing their efforts on Lalibela, a holy city known for its churches hewn out of rock. It is about 45 minutes by air from Addis Ababa but western tourists tend to stay only one or two nights. Connect Ethiopia manager Katherine Meenan said the team was aiming to improve the offering for tourists so they would stay longer.

One week. But no film crew. Pity. It would have made an interesting documentary.