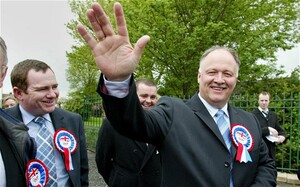 British prime minister David Cameron’s plan to legalise gay marriage passed its first hurdle in the House of Commons last night – but he was unable to get a majority of his own Conservative MPs to back him.

The legislation, on which MPs had a conscience vote, passed its second stage easily with the support of most Labour MPs, Liberal Democrats and a smattering from the smaller parties, bar the Democratic Unionist Party.

Fifty-five Conservative MPs voted against the government, including DUP Upper Bann MP David Simpson (you’ll remember the hoo-hah caused last year when a recording device was found in the toilet of his constituency office, leading to the arrest of his political advisor), who brought many lols to the House with the following:

South Antrim MP the Rev William McCrea said moral truths learned “at mother’s knee” were threatened by the legislation, which would “wipe away” values that had held true for centuries for people around the world, irrespective of their beliefs.

The DUP. A great bunch of lads.