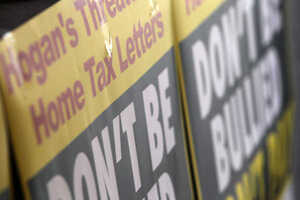 The Government has resolved to change elements of the incoming property tax but it has refused to yield to the clamour for a fundamental review of the charge.

The move, to be made public today by Minister for Finance Michael Noonan, will increase the number of exemptions to the tax.

But Government sources indicated last night that there would be no reprieve for homeowners who made big stamp-duty payments at the height of the property boom.

Measures to ease the disproportionate burden on property owners in Dublin, a source of contention for some Government TDs, have also been ruled out.

Under one new exemption, however, all local authority and voluntary housing association homes will be put into the valuation band for properties worth up to €100,000, the lowest of the bands.

Under a further measure, previously signalled by Mr Noonan, the tax will not be levied on houses that require remedial work due to damage caused by pyrite.

Not Making Light Of It

Pay Up And Shut Up Latest